We were still married and living in the wilds of San Bernardino, California, in the “garden spot” of the Inland Empire. I knew that something was up. He had been acting strangely of late. Well, more strange than usual even for him… He had started getting up and going out early on weekends. Early as in five or six o’clock in the morning. When I asked him where he was going all he would say was “Errands.” Granted, things between us had been difficult for some time, but usually when I asked him a direct question I got a direct answer. Not this time though, and I got the distinct feeling that pressing him for more information was a lost cause. Fortunately, four years of marriage had taught me a great deal about patience. I decided to wait and watch because I knew I would eventually learn or discover what he was up to. I was right.

The summer of 1998 was just beginning, and the 4th of July was approaching fast when Ray (my ex-husband) sat down next to me in the living room with a serious look on his face. Based on his facial expression and body language I was afraid that something bad had happened, like the transmission in the car had exploded or he had finally made the decision to go active military and he was being assigned to an aircraft carrier. Fortunately it was nothing of the sort.

I forget exactly how he went about it, but he eventually confessed that his “errands” had been ultralight flying lessons from a flight school at the Perris Valley Airport, some thirty-five or forty miles away from where we lived. Somehow I maintained a calm, accepting demeanor, trying desperately not to think about how much this had cost and at last understanding a series of mysterious withdrawals that had been cropping up in our checking account over the last several months. Apparently I remained so calm that Ray decided I had already figured out what he was doing before he told me, and I did nothing then or in the months to come to dispel this misconception. As it happens, the only reason he was telling me about his extracurricular activities was that he was about to make his solo flight and he wanted me to be there when he did. Still doing my best to be an understanding and supportive wife despite his secrecy and deception, I agreed to do so and went with him to the airfield early the next morning. 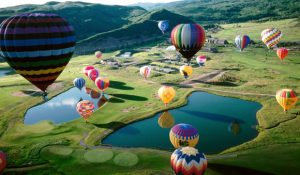 I already knew all about the airfield in Perris, CA. It was and is a sort of mecca for air sport fanatics, located about ten miles south of March Air Reserve Base. A good friend of Ray’s flew his hot air balloons there, and was also where Ray had (I think) made his one and only sky dive. Somehow it seemed that whenever Perris was mentioned the phrases “hot air balloon,” “sky diving,” and “fly ultralights” always came out in rapid succession. Now, I had been on a couple of balloon flights and thought they were ok, but not something I wanted to do over and over again. I also had a friend from high school who survived double parachute failure while he was serving in the Army Airborne Division, so the idea of jumping out of a fully functional airplane just for kicks left me cold. As a result the idea of flying ultralight airplanes never had a chance to be considered. Not even a little. The litany of Perris always went “hot air balloons,” “sky diving,” “fly ultralights,” in that order, and as soon as my mind heard “sky diving,” it locked up. Anything said after that fell on deaf ears.

With this in mind my ex was greatly surprised that I managed to fall out of bed some time between four-thirty and five o’clock in the morning, but I knew that this was important to Ray, the fulfillment of a long held dream. This made it imperative to me to be there for him, a captive cheering section and semi-moral supporter. Duty called, and I rose, literally, to the occasion.

As we pulled up to the field there were no surprises. It looked the same as it had the last time I had been there – dusty, flat, and dry, with mountains visible in the distance all around. The men at the flight school were in perfect keeping with the personality profile I had sketched out during my prior visits. They tended to be older, scruffy, salt-of-the-earth types. No rocket scientists here! These men were mechanics, oil workers, and retired military. I smiled graciously, drank the weak coffee I was offered, and played out my assigned role of dutiful wife visiting the boys club in the desert.

As expected, Ray’s solo flight was fine. With practiced ease I smiled and waved as he flew past in a contraption that more resembled a pterodactyl than an airplane. Afterwards my ex and his instructor flew back to the airpark from the practice area where he had soloed, and I got a ride from an older gentleman who was the instructor’s father and quite a pilot himself. Still no surprises. Then, just as I thought we would begin the endless recounting of stories about other flights and other pilots, my ex tells me he had arranged for me to have an introductory flight of my own. Ok, I think to myself, sounds like fun… Little did I know!

My flight experience at that moment was limited to a handful of flights on commercial airlines, just one more piece of comfortable cargo en route to see relatives for some special occasion or other. I had enjoyed the flights, always preferring the window seats, and sometimes during take off it amused me to imagine that the plane was a space shuttle blasting away toward some distant planet. But I had never been at the controls of an airplane myself, nor had I given much thought to doing so.

Helmets, goggles and gloves were donned. Words of encouragement and good wishes were uttered and answered. Then I climbed into the left seat of the contraption that would soon carry me into the air, a Quicksilver Sport II with yellow sails and red trim. If you are not familiar with ultralights, picture an open framework of aluminum tubing with two side-by-side bucket seats, six-inch tires on the bottom and thirty-six feet of wingspan on top. There was no windshield, and the only things holding the wings and airframe together were bolts and cables. Hardly a graceful or even appealing looking craft and certainly not the image most people envision if you talk to them about flying!

The call went out: “Clear Prop!” and the two-stroke engine rumbled to life, vibrating the plane and drowning out the conversations of those who stood watching a few feet away. Next came the pre-flight checks: Controls, Instruments, Gas, Altimeter/Arm the Parachute, Run-Up the engine, and Safety Straps. From the start it was clear to me that this was well-worn litany had been repeated by the instructor countless times, yet he did so with keen attention to each detail. Then my instructor took several minutes to describe and demonstrate what each part of the plane did and how it would be used during the flight. Finally it was time for take-off and we headed down the dirt runway, bouncing along until the plane lifted itself from the ground with a gentle ease that was graceful beyond words.

How can I describe what happened next? To say that we flew over the nearby terrain, that we followed the winding course of the canal to the south of the field and circled two small hills nick-named after Dolly Parton’s most famous attributes is to paint a lifeless, colorless picture of what occurred. To fly! To feel the wind against your face, the vitality of the air all around you as you dance above the earth, a human being united in the moment with metal and plastic and cloth, interacting with each breeze and gust of wind in a ballet more intricate and dynamic than any that ever graced a stage. Even this is but a bland and flat account of what I felt and saw and experienced!

In an instant I was hooked, and I am told that when we landed my smile was wider than the wings of the plane I had flown. Beyond that all I recall is that the first words out of my mouth were “I want more!”

That’s how it began, this love affair with flying in general and ultralights in particular. I built a web site for my flight school, both as an advertisement for the school and as a resource for those who want to know more about ultralight flying, and the more I learn the more I want to share the joy of flight with others. It’s like a hunger that grows more intense when you feed it, and that leaves you feeling wretched and weak if you don’t. I’m a pilot now, and that simple fact has changed me.

Being a pilot touches my life in strange and wonderful ways. Now when I watch a hawk soaring high above the mountains where I live, it’s as if I’m flying with it and can feel the lift of the thermals carrying us higher into the sky. Sometimes, too, a breeze will touch my face and bring to mind the sweet coolness of the air just before sunset, and the smooth, gentle currents that caress you as the day draws to a close. I watch the clouds, reading them for air turbulence. When I look at roads and fields, I assess whether or not I could land on them. Everywhere I look I find familiar places and things take on a whole new dimension, as though I see them through a different set of eyes.

How can I make you understand what it means to fly? I wrack my brain for words that can capture the essence of how it feels, but no words that I know come close. It’s a subtle thing, yet it touches everything I do and is powerful enough to make me drive two-hours one-way to be with my friends at the field, a field once described by my ex as almost sacred, and that he no longer frequents.

Yes, indeed, it’s all his fault. And even though we are no longer together, my ex is the one who introduced me to the world of flight. As long as I live, should I live to be a thousand, I could never thank him enough for giving me my wings.

Learn One. Do One. Teach One.

About the First Amendment…