Home »CyberSecurity»Alice in a Cyber Wonderland… 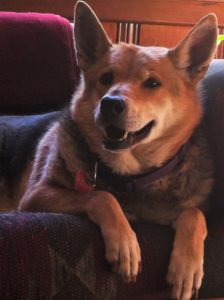 Lila, my German Shepherd/Jindo mix. I miss you, baby girl. 😢

Yeah, 2016 pretty much sucked from beginning to end. Between the losses of so many talented people (Bowie, Prince, Ali, Reagan, Fisher, et al…), the election of the he-who-shall-not-be-named, and the death of my dog, on Christmas Eve, no less… well, it’s no secret that I was glad to bid 2016 a not-so-fond farewell. The Good News is that when you find yourself face-first on the pavement, it’s difficult to fall much further.

And so I found myself, reeling as I was from shock over who was elected to the White House, asking myself what I could do to make sure that the Russians would never again be able to hack our elections. Around the same time, I received an email from my alma mater, Saint Leo University, that they had expanded their cybersecurity program to include bachelors degrees in addition to their existing masters degree program.

It’s no secret that I had been ambivalent about getting a bachelors degree. The obvious thing was for me to get a Computer Science degree, but I’ve been working in information technology for so many years that a CS degree would do nothing more than certify what I already know. Worse yet, getting a CS degree would have me taking classes about technologies I used every day, and one of my character defects is that, for me, boredom is the kiss of death.

But cybersecurity… Now that is a subject I have had an interest in for years. Better yet, pursuing a cybersecurity degree would mean that learning new things, expanding on what I already know, courtesy of spending the past twenty-odd years in web development.

I considered and contemplated, did some online research about the program, its requirements, etc. Long story short, when the regularly scheduled call came in from SLU asking me to sign up for classes again, this time I said, “Yes,” and in January 2017, I started working toward a new career path. Then things started getting interesting…

Let me give you some context. I built my first web page in 1992, as a silly, fun thing to do that I never expected to go anywhere. Then in early 1995, I found myself working for a small ISP, learning about this “Internet” thing, systems administration and web development. It was like drinking from a fire-hose, with so much to learn and so much to do. One of the things that helped me keep from drowning in all those 1’s and 0’s was a BBS group called “SpiderWomen.” The SpiderWomen BBS was made up of female web-slingers like me, and we shared information about web development tips, tricks and traps with each other in equal measure with other forms of support and “fellowship.”

Fast-forward to February 2017… Here I am, committing myself to pursuing a third career,  but not really knowing what I have gotten myself in for. So I hop online, do some searches, and try to find out what resources are available for women in the cybersecurity field. Before long, I find the Women’s Society of Cyberjutsu (WSC), among others, and I apply for membership. My email inbox soon starts to fill with assorted newsletters and announcements about this brave, new world I’ve entered, and in March 2017, I see a blurb about a webinar on BrightTalk about cybersecurity training for women.

At this point, I had never heard of the SANS Institute. (I’m a web developer, dammit, not a cybersecurity expert!) But this Sonny Sandelius guy had a good pitch about a women’s intensive academy, and the idea of a scholarship for industry-related certifications sounded like a good idea. So, I sent SANS an email saying I was interested, and took their online aptitude test (which I was sure I failed). Lo and behold, shortly afterwards I get an email letting me know I hadn’t failed, and when could I be available for a phone interview?

At this point I was still telling myself that there was no way I was going to be accepted for this scholarship. (Yes, I have an extreme case of imposter syndrome. Tell me something I don’t know…) But I went through the motions, scheduled the interview, had a lovely conversation (for over an hour!) with a young woman named Tiffany, and walked away afterward, telling myself, “Well, that was nice and all, but it’s time to get back to reality, and I have homework, a full-time job and a dog to take care of.”

The days ticked by, and, in spite of myself, I found myself growing more anxious as the deadline for the final announcements about the SANS Women’s Intensive Academy drew near. Finally, I saw an email from Sonny. When I read the words telling me that I had been accepted, well, I was really glad I was sitting down because I probably would have fallen down had I been standing. You see, by this time I had done my research about SANS, and about the GIAC certifications that were part and parcel with the Academy scholarship. I had not been able to find anything negative about either. Nothing. Nada. Zip. Nil. Quite the contrary. I had learned that GIAC certs are the industry standard for cybersecurity, and SANS is not only the leader in training for GIAC certs, but they have been providing cybersecurity training since 1990! That’s, like, a gagillion years in Internet years! (Think “dog years,” but more extreme. I know! I’m a web geek, remember?)

That was in early May.

As I write this now, I am sitting in a hotel room in Denver, Colorado. I’ve completed three-of-six days of training in cybersecurity essentials, and in spite of being dain bramaged, exhausted, and umpteen shades of overwhelmed, I feel more energized and excited than I have in years. The other women from my “cohort” who are here, going through the same training I am, are smart, talented, amazing individuals. Words fail to express what an honor it is to be included in their company.

As if that wasn’t enough, I find myself feeling like I have “found my tribe.” The people here are geeks. I get their jokes. They get mine. Male and female, we all thrive in the digital realm. And every one of us knows, down to the marrow of our bones, that digital security matters.

It’s a heady mix, and I want nothing more than to kick as much cyber-ass as I can and hang out with others who feel the same way I do.

Will I feel the same way six months from now? I have no idea, but, as Matthew Quigley once said, “I don’t know where I’m going, but there’s no use being late.”